Cannabis vs Alcohol: What You Need to Know 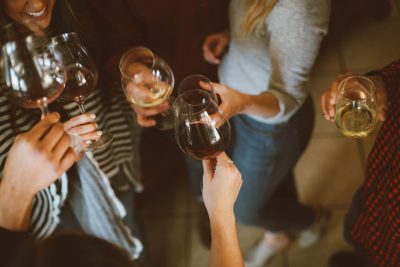 More and more states are legalizing medicinal and even recreational cannabis use, and the question of cannabis vs. alcohol seems to be on everyone’s minds. Cannabis and alcohol have long been portrayed as relatively similar vices with a variety of risks and few benefits, but surveys show that even those who don’t smoke or ingest cannabis themselves believe it’s the better choice.

From addiction rates to brain health, we’ll explore the risks and benefits associated with each.

Although alcohol is legal in all 50 states, it’s responsible for nearly 90,000 deaths every year, according to the CDC. That’s over twice as many deaths as gun violence. Those deaths account for 2.5 million years of potential life lost, and about half of those deaths can be directly attributed to binge drinking. It’s also the leading risk factor for death for people between 15-49 worldwide, with 3.8% of female deaths and 12.2% of all male deaths in 2016 attributed to alcohol use.

In comparison, the number of annual deaths attributed to cannabis overdoses is zero. One study found that in order for someone to die from an overdose of THC, they’d have to smoke approximately 1,500 pounds of cannabis in 15 minutes.

This isn’t to say cannabis isn’t linked to car crash fatalities or other accidents, but when comparing the number of deaths directly linked to over-consumption, it’s clear that cannabis is the safer choice.

When it comes to cannabis vs. alcohol, another important area to explain is brain health. We all remember the “This is Your Brain on Drugs” anti-drug campaign from the 80s where a brain on drugs is compared to a fried egg, but what does a brain on cannabis really look like? Well, as it turns out -- a lot different than the brain of someone who imbibes.

Scientists at the University of Colorado Boulder compared imaging data of cannabis vs. alcohol users, looking for differences in gray and white matter volume. Both white and gray matter are essential to brain health, and any reduction or loss in their integrity can lead to impairments in brain function.

The study compared the brain images of 853 adults and 439 teenagers. All participants varied in their use of alcohol and cannabis, and here’s what they found: alcohol use was associated with a reduction in gray matter volume, as well as a reduction in the integrity of white matter. Cannabis use, however, appeared to have zero impact on either. Based on these findings, the researchers concluded that alcohol is more harmful to brain health than cannabis.

Although cannabis is generally believed to be less addictive than alcohol (and CBD holds significant promise for treating heroin addiction), there haven’t been many studies that focus on cannabis vs. alcohol addiction rates.

One of the largest studies on the subject occurred in 1994. For the survey, epidemiologists at the National Institute on Drug Abuse asked more than 8,000 people between 15-64 about their drug use. Of those who had tried cannabis at least once, roughly 9% could be diagnosed as being addicted. For alcohol, the figure was about 15%. For the sake of comparison, the addiction rate for cocaine was 17%, while heroin and nicotine were 23% and 32%, respectively.

According to the study, alcohol is almost twice as addictive as cannabis, and only 3% less addictive than cocaine. It’s important to note that cannabis vs. alcohol addiction is hard to compare: alcohol is more widely accepted across the U.S.; therefore, drinking alcohol is much more common.

In addition to the extremely high lethal dosage amount mentioned above, there are no recorded deaths attributed to a cannabis overdose.

Although consuming too much cannabis can impair motor skills, increase heart rate, and cause short-term memory loss, the solutions to these problems typically come down to moving to a more relaxing atmosphere or using calming methods to ease an anxiety attack. If an individual does go to an emergency room after consuming too much cannabis, most medical professionals will try to talk you down. In extreme cases, they may give you a sedative.

The symptoms of alcohol overdoses, on the other hand, range from unpleasant to life-threatening. According to the National Institute on Alcohol Abuse and Alcoholism, symptoms of an alcohol overdose (often referred to as alcohol poisoning) include “mental confusion, difficulty remaining conscious, vomiting, seizures, trouble breathing, slow heart rate, clammy skin, dulled responses such as no gag reflex (which prevents choking), and extremely low body temperature.” Alcohol overdoses can lead to permanent brain damage or death.

Because of these stark differences, many people consider cannabis to be a safer option.

In 2017, a group of the nation’s top cancer doctors issued a statement asking people to drink less. They claimed that there was strong evidence that linked drinking alcohol, even as little as a glass of wine or beer a day, to an increased risk of developing breast cancer. It’s also listed as a known human carcinogen by the U.S. Department of Health. Per the CDC, long-term effects of alcohol include cancer of the breast, mouth, throat, esophagus, liver, and colon.

Although some initial research suggested a link between cannabis and lung cancer, that theory has since been debunked. A later report found that cannabis was not connected to an increased risk of the lung, head, or neck cancers that are linked to smoking cigarettes. Of course, it’s worth noting that short and long-term risks of using cannabis vary by consumption method and that there aren’t as many high-quality, long-term studies on cannabis and cancer.

Ultimately, alcohol is linked to several types of cancer, while cannabis is not. Plus, there’s solid evidence that CBD can reduce tumor growth in animal models of cancer and may also enhance uptake or increase potency of certain drugs used to treat cancer.

Last but not least in the cannabis vs. alcohol debate: weight gain. We all know that maintaining a trim waistline is essential for long-term health, but what kind of effect do cannabis and alcohol have on maintaining a healthy weight?

Whether from first-hand experience or not, it’s commonly known that cannabis causes the munchies. But despite consuming over 700 extra calories when smoking, cannabis users generally don’t have higher BMIs. Another study found that the rates of obesity are actually lower by a third in people who smoke cannabis at least three times a week, compared with those who don’t use cannabis at all.

Alcohol, on the other hand, appears to be linked with weight gain. One study, the first to evaluate heavy drinking during early adulthood and its impact on weight gain five years later, found that heavy drinking was associated with a 41% higher risk of transitioning from normal weight to overweight and 36% higher risk of transitioning from overweight to obese.

Plus, alcohol in itself is caloric: a can of beer has about 150 calories, a glass of wine has about 120, and those sugary mixed drinks can have a whopping 4,000 calories in one serving.

So, Why Is It Still (Federally) Illegal?

Although cannabis is legal for medicinal or recreational use in 34 states as of May 2020, and two out of three Americans favor legalizing it, it still remains illegal on a federal level. Why? Well, there are a few theories.

First, as noted in The Economic Impact of the Cannabis Industry in Maryland, the U.S. government is taxing profitable cannabis companies at a legally exorbitant rate. If cannabis were suddenly legalized, cannabis businesses would be able to take the same corporate deductions as every other company, costing the federal government an estimated $5 billion in tax revenue over the next decade.

Next, it’s a partisan issue. According to a Gallup 2018 survey, 75% of Democrats and 71% of Independents would like to see cannabis legal across the country. Unfortunately, only 53% of Republicans felt the same. That’s a problem considering the Republicans currently control the Oval Office and Senate. While it’s undeniable that the GOP has softened their dislike of cannabis over the past decade, it’s also very clear that there’s a divide between Democrats and Republicans on what the future of legalized cannabis would look like in the United States.

Finally, legalization advocates have long speculated that “Big Pharma” has been working behind the scenes to maintain cannabis prohibition. This makes sense, considering they stand to lose $4 billion per year if medical cannabis became legal in all 50 states. Although one study found no evidence that legalization has had any impact on spirit sales, the U.S. alcohol and tobacco industries have long been avid opponents of cannabis legalization.

The Future is Bright

Curious about what you can do to support legalization efforts in your state? Read our blog here.

Tips for Incorporating Cannabis Into Your Yoga Sessions

Yoga requires total focus on one’s mind and body. Cannabis is a plant that, when used in certain ways, can allow users to more fully access their ...

CULTA Welcomes and Thanks Our Veterans

November 11 may be Veterans Day, but at CULTA, we strive to honor those who served in the armed forces each and every day. In recent years, more and ...

Four Natural Ways to Get a Better Sleep

If you aren’t getting a good night’s sleep, you aren’t the only one. Nearly 70% of American adults report that they obtain insufficient sleep at ...